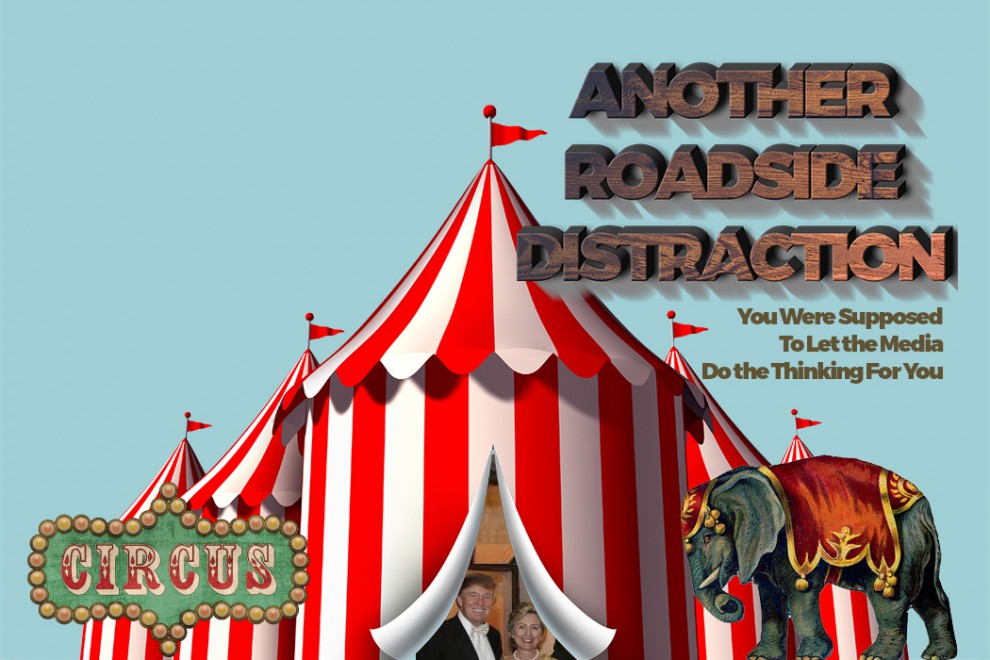 “Look, America is no more a democracy than Russia is a Communist state. The governments of the U.S. and Russia are practically the same. There’s only a difference of degree. We both have the same basic form of government: economic totalitarianism. In other words, the settlement to all questions, the solutions to all issues are determined not by what will make the people most healthy and happy in the bodies and their minds but by economics. Dollars or rubles. Economy uber alles. Let nothing interfere with economic growth, even though that growth is castrating truth, poisoning beauty, turning a continent into a shit-heap and riving an entire civilization insane. Don’t spill the Coca-Cola, boys, and keep those monthly payments coming.”
― Tom Robbins, Another Roadside Attraction

You’ve really gone and done it this time, Americans. The political parties worked hard to keep voter turnout low. The media cartels told you how it was supposed to be. They went to all of that trouble weaving together a story-line they thought that you would like, and you had to go and vote using your own free will. This is why we can’t have nice things, like “Democracy.” You had to go and think for yourselves.

As I type this, Bernie Sanders has won four of the last six primary contests, and it seems to really be upsetting the establishment who has been calling for him to drop out of the race. The six media companies that own just about everything are besides themselves with disappointment. They worked so very hard to diminish the message of the Sanders campaign, to barely report on it, and somehow it’s still getting out to the people. Worse than that, it seems to be resonating. The media wanted this for Rubio, not Sanders!

Annie is so very American that she defies both stereotypes and expectations. She lost her father to cancer two winters ago. He was Muslim. Her mother is Jewish, healthy and considering a move to Florida. Annie is a 24-year-old agnostic who lives in Omaha. She has a green eyed girlfriend that she calls Suzette, even though her name is not at all Suzette. They both work multiple jobs within what we now call the “gig economy” to make ends meet. From their photograph, I would bet they’re in love. There’s a certain degree of happiness that can’t be feigned for the camera.

“I supported Hillary Clinton for President until right around this last Christmas,” Annie tells me. She’s a vocal Bernie Sanders supporter now. We had that in common. “Suzette and I were flipping through records at a thrift shop, and a guy she knew from school said hello. He started pestering us about supporting Bernie, like Bernie Sanders converts do. A lot of it just didn’t gel what we thought was going on. We went home and did some research. We’ve been researching ever since, because the most important thing we learned that night was that our TVs lie to us, a lot.”

I changed Annie’s name, and Suzette’s nickname above. Unlike the mainstream media, I want you to be aware of the level of showmanship I’m willing to perform to push my narrative. While they perform mental slight-of-hand tricks to paint a center-right war-hawk as a Progressive and an accomplished Senator who has spent his life fighting for social and economic justice as an inexperienced clown who is weak on race, I’d prefer to keep your eyes on the cards. I hope you’ll see the well-planned, stacked hand you’ve been dealt.

As “Annie” attested to, we live in the age of research. Humanity’s vast collection of knowledge throughout the ages rests now neatly in the palm of your hand. I’m not going to list all of the things that the mainstream media has misrepresented about both Democratic candidates, because frankly, that would take an entire website to catalog at this point. However, it is important to look at the slight of hand tricks they use for distraction, to keep the public in line.

For instance, if all you took in for information was cable “news,” you might believe that Bernie Sanders has a problem with women and African American voters. However, if you look at the data, he’s performed quite well with both demographics when they are young or make less than $100k annually. The mainstream media doesn’t ever say that Hillary Clinton only attracts wealthy women in her own age group. It wouldn’t be entirely accurate, but neither is saying the inverse about support demographics for Bernie Sanders. Lots of women and black people support Bernie. Lots support Hillary. People are individuals. However, mainstream media only reports on Trump and Hillary. They give as little airtime to the policies of Bernie Sanders as possible.

I believe, when we all dissect these campaigns in 2017, we will talk less about race and gender, but much more about where people got their information from. While television networks and cable “news” try to inflate delegate counts with magical super-delegates, they refuse to admit that despite their best efforts, Bernie Sanders is gaining in momentum, and if it continues, he will continue to win primary contests as they move into delegate-rich liberal stronghold states. These media cartels would rather you believe that terms like “low-information” voter are based in racism, rather than referring to voters who are less likely to be connected to the internet or avid users.

The United States falls behind in high-speed internet connectivity as is, but when you factor in our extremely high-rate of poverty, which also limits access to information, it also makes it harder for an electorate to stay informed. In a climate of “news” outfits that donate to and favor a particular candidate, information is distorted without doing self-research. Families struggling to feed their children and keep roofs over their heads don’t necessarily spend the $50 to $100 a month necessary to stay connected to the internet. Even if they’re taking advantage of things like library connectivity, they’re likely not researching the topics of the day during that limited time.

The most recent study we have on connectivity in detail is already three-years-old. However, it shows that wealthy cities like Boulder, Colorado have a connectivity rate of over 92% of households. Poorer cities, like Detroit, Michigan have around 60% of households connected. Sure, Boulder is much whiter than Detroit, but it’s just as fair to say that Bernie won Boulder and Hillary won in Detroit because of access to free information. This is a thesis I fear I won’t be able to prove until the primaries have all taken place, but is just as sound as the narrative about race and identity politics the media pushes daily. Welcome to the Information Wars.

Charles isn’t really named Charles. Both of my grandfathers shared the name Charles and I am fond of it. So, when changing names to protect the innocent, I decided a man who isn’t named Charles could be for the sake of our story. Charles is a retired gentleman, 72 years of age, African American, with white thinning hair and shares my enthusiasm for Bernie Sanders. He’s got a really cool, pencil-thin mustache, resides in Buffalo, NY and told me his take on my connectivity thesis.

“You’re onto something, my man,” Charles replied. “Not a lot of people my age in my neighborhood surf like I do, and they buy into this Hillary has my back (expletive.) I try to tell them what I’ve learned about the records of these people, but sometimes people have to see for themselves, you know? They’re not getting a fair shake from the Clinton News Network.”

It’s important to note that Charles started going online in 2008 when he got curious about a young Barack Obama challenging Hillary Clinton for what many in the media had determined would be her turn at the Oval Office. He’s been researching his own opinions and how they align with the political parties and the politicians ever since. He no longer trusts the media. He no longer trusts the Democratic Party. He’s a lot like me, despite our differences in age, race and which Pam Grier movie is the best. It’s “Coffy,” sir. The right answer is always going to be Coffy.

I talk to my non-internet-friendly grandparents about politics all of the time. I’m always having to use my smartphone to disprove something completely false that they learned from the 24-hour “news” networks. I’m worried that there is an entire generation of misinformed voters out there.

I type this weekly missive to you the day after Bernie came from behind to win the Michigan primary. He was down 18-25% in the polls just two weeks ago. To me, this victory means a lot, because it means in just two weeks, phone-bankers, internet advocates, and canvassers were able to break through the mainstream media narratives and get the message of the Bernie Sanders revolution to the people. The media is pushing back today.

Just like how they tried to turn a candidate being unwilling to let his opponent usurp his time in a debate into some weird form of sexism, they’re using the art of distraction to tell us that Michigan doesn’t matter, that THESE black votes don’t matter, that he wouldn’t have won if it weren’t for Muslims, and that Bernie isn’t a real Democrat.

I’ve been a Democrat since the day I could be. I for one am more fearful of Third Way, or that the Democratic National Committee chairwoman Debbie Wasserman Schultz has invited lobbyists into the party at full-press, and has consistently tried to rig the primary process for her old boss, Hillary Clinton.

I’m not at all scared of an independent running under our party banner in an effort to pull us back to the left where we belong. Maybe that’s just me, but at least I’ve researched what’s actually going on in my party. I made informed decisions on my opinions.

That’s all I want for America. If the media isn’t going to provide the service of being the fourth estate and giving unbiased information to the masses, the responsibility of research falls on the citizenry. Not all Americans have access to free information. The poor and elderly are duped daily by corporate “news” based on an economic agenda. We can’t expect that every American has access to read the Intercept or watch the Young Turks and get information contrary to what the corporations are propagandizing. An informed electorate would be watching Benjamin Dixon on YouTube, as much as Don Lemon on CNN, in my humble opinion.

If you’re reading this, you have internet access, and are already likely inclined to counter the distraction tactics of the mainstream media by seeking out your own information. Good on you, as they say. Yet, we the people have to start having an honest discussion about the state of our corporate consumerism based “news” media and the multi-corporation cartels behind them. They do not serve the public trust, and without making internet access a basic American right, as much of half of the electorate is at risk of being under-informed and misinformed.

In the meantime, it’s up to those of us who question the media narratives and slight-of-hand distractions to loudly and proudly dispel these myths. Write letters to the editor of your local publications. Print out articles and leave them at laundry mats, on bulletin boards and in nursing homes. I don’t know, but do something. We’re not just fighting a corrupted Democratic Party. We’re fighting a corporate establishment that has infected the very way the electorate thinks. It’s time to break the magician’s code and reveal the tricks and illusions so that people can once again think for themselves.

50 States of Grey
White Progressives and the Chamber of Secrets