When they say that an Obama rally is like a rock concert, they haven’t been lying. Thursday’s event was full of music from Will I Am, Stevie Wonder, John Legend, Cheryl Crow and yacht rocker Michael MacDonald. Cheryl Crow was actually really good, and seeing Stevie Wonder was a dream come true.

Since it was the anniversary of Dr. King’s “I Had a Dream” speech, 45 years ago, tribute was paid by his daughter and son. Many were moved to tears, including me.

They say there were around 80,000 of us in attendance. Here are some crowd shots, so that you can get an idea of the house.

I was stationed behind the press boxes for the networks. It made it hard to see the actual podium, but I had a great view of the big named broadcasters. I decided to take photos of them all. I tried to get Anderson Cooper, but he’s guarded like a rock star by security. He’s the Elvis of TV news. I take a great seat. Well, if it weren’t for CBS news, I’d have a great view.

Charlie Gibson was the ONLY major broadcaster to turn around and watch the speeches when he wasn’t on the air.

No shock, the FOX News pundits were often snickering and heckling.

Katie Couric gets her hair and makeup played with a lot.

NBC News was as stiff as they seem.

The speeches are all distributed to the press from the DNC before the speaker takes stage. Bloggers type furiously, even though there’s no internet access, forgetting the transcripts will all be online by the time they get online themselves.

Richardson (Not Horatio Sanz) hits the civil liberties theme hard, which is a giant success with the crowd. I kept thinking that he and I have the same beard.

Should be President Al Gore takes the stage to a lengthy and noisy standing ovation. As he reminded us the importance of this election, but reiterating what would have been different should he have taken the office. I teared up yet again.

Joe Biden introduced a gigantic list of military generals endorsing Obama as well as some regular folks who have switched their party to support Obama. The regular folks had the entire stadium cheering their loudest cheers yet.

Obama takes the stage and delivers a speech catered to this crowd, Democratic delegates and voters. He hits policy hard, and recaps all of the themes from the week.

I get caught up in it all.

Fireworks and Confetti fill the air.

It was like Woodstock, without drugs and mud. So, it was better than woodstock.

Preparing for my annual State of the Union Address 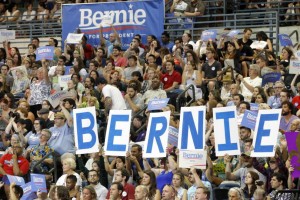 All of Us Together

Altered States of the Union

When a Buffalo Roams Into a Donkey Show
Park Bench Interview