I have learned so very much these past several years from my brothers and sisters in the movements. Notice I used the plural in that sentence. From Occupy Wall Street to #BlackLivesMatter to Fight For 15 to the Bernie Sanders revolution, common people have risen up to fight oligarchy, systemic racism, corporatism, and the issues of social and economic injustice. Though the corporate media cartels predictably rally to mock and diminish us, we’ve done so in such numbers that they can’t completely ignore us.

The Bernie Sanders movement mobilized us in a different way, and though not every member of Occupy, BLM or Fight For 15 joined in, many joined in solidarity as numerous other Americans woke to those issues and so much more, and we stood up together. We did not win, and many of us will argue that we were severely cheated, but we scared the establishment. We must not back down now. We must strengthen our coalitions. We must endure. The struggle continues. The likelihood is, that as I type this, a corporation is subverting democracy, a police officer is executing someone extra-judicially, a minimum wage worker is getting evicted, and many other crimes are being committed against humanity by the wealthy and the powerful.

We funded a Presidential campaign on $27 donations, mostly from people living just above or below the poverty line. We made Wall Street reforms, policing reforms and economic fairness campaign issues together. Though those issues were abandoned by the two political parties acting as one even before their conventions, we must fight to make certain these issues are a part of the national conversation, now and even after we win our struggle. We will win our struggle, but we will need to stay vigilant to keep those who profit from greed, racism and worker exploitation from ever rising to the power they enjoy right now ever again.

I read early in the week that the movie, Suicide Squad, made over $28.6 million in the first weekend of release. Where I live, the average movie ticket costs about $15. I remembered how we money-bombed Bernie, and was curious how many people money-bombed the Suicide Squad picture. Just shy of two million people saw that film opening weekend. That’s less than one-quarter of the people who live in New York City. That’s less that one-sixth of who voted for Bernie Sanders, and were fortunate enough to have their votes count.

The average cost it takes to transition a homeless person into housing for a year and rehabilitate them into society is just over $16,000. If everyone who saw Suicide Squad matched what they spent on tickets to the cause, we could house over 17,000 homeless. Just like how $27 funded what should have been a winning Presidential bid, $15 could restore dignity to 17,000 people’s lives.

I believe that the Bernie Sanders crowdfunding experiment proved that poor and working class people are willing to sacrifice to find funds to be charitable with, especially if it brings them hope. I believe the 2016 primaries proved to us that our votes do not count, but that money does. Imagine if the Bernie Sanders e-mail list could be used by an actual activist, what we could do by directing weekly $5 money bombs at issues and charities.

I know Bernie himself will be announcing his #OurRevolution initiative this month, but forgive me if I don’t trust that system yet, or let alone think it’s fair that hashtag has been co-opted in this way. I’m sure to participate, however, and hope to use this missive to convince you how we should influence that grassroots organization from the grassroots.

Imagine if all 14 million of us who voted for Bernie gave $5 to lobby for Wall Street reform. Imagine if next time a police officer executed someone, denying them their Constitutional right to a day in court, all near 14 million of us gave $5 to help the family of the victims seek justice through the courts. Imagine if we established a trust of $70 million from a single $5 donation to help minimum wage workers keep their apartments or get healthcare. Virtually no issue could go unchallenged. All we lack is organization. Pissed off at the corporate media cartels as much as I am? Heck, if 14 million folks give $5 to Podcast Revolution, our team at Media Revolt will start a damn 24-hour network. It could be done easily with those resources. We have the human resources. Our entire movement has the human resources necessary to change anything. We just need to consolidate our capital resources to make it happen. If we all throw $5 at any issue, we can all change the world.

The wonderful Kshama Sawant and her colleagues at Socialist Alternative have been calling for a coalition party of the 99%. They lay it out plainly, and what they say is absolutely true. The people have the numbers. A majority of Americans agree on the issues and are Progressive on the issues. What we lack, in our system of a duopoly of two political parties acting for the same economic interests, is anyone fighting for the economic interests of the vast majority of Americans; the 99%.

I say we take it a step further, and become the largest political action committee ever formed. In old school political terms, the working class vastly outnumbers the one percent at the top. The math is right there. It’s an age-old political argument: proletariat and bourgeoisie. The capitalist class is choking democracy to death. We have to fight them not just at the polls, but with their own weapon, the almighty dollar. Let’s start crowdsourcing against oligarchy. Let’s start a mass renaissance of charitable acts to change the world. From the people, for the people, for each other, we give small amounts in mass.

No matter how confused I am over Bernie Sanders endorsing the war criminal Hillary Clinton, who conspired with media cartels and the Democratic National Committee to steal a primary from him, I will support his #OurRevolution campaign. However, and I’m begging you to join me on this, I will be actively trying to lobby the organization to not just concentrate on Progressive down-ballot candidates and issues. We must become the largest political action committee the world has ever known, in hopes of saving the world.

I donated the value of two tickets to see Suicide Squad to a homelessness charity I believe in. I challenge every comic book-loving Progressive who reads this to do the same. My pet issue is developing people interested in independent media into their own platforms to challenge the corporate media cartels. I spend every moment of free time and every spare penny I have on it. If that issue appeals to you, I challenge you to join us. Yet what I dream of, is that we are so organized as a movement, that we can influence any issue, any charity, any start-up, any candidate, any legislation, through not only our votes but through crowdsourcing against oligarchy. Again, if we all throw $5 at any issue, we can all change the world.

I’m not looking to be a leader on this. First off, I’d be bad at it. I’ve been trying to crowdfund my show and our work at Podcast Revolution / Media Revolt and have raised $20. I also don’t think we should trust just anyone. However, despite the Democratic National Convention, I still trust Bernie Sanders and I am advocating we co-opt his #OurRevolution campaign and give it further purpose. I beg of you to join me in that mission.

We don’t have to vote the same way or even agree on all of the issues, but if we money-bomb the issues we agree on, as a collective of many movements, we can change the world. We just lack the organization to do so effectively, so let’s join Bernie’s organization and push it to do this good work.

Let’s pool five dollars a week, all 14 million of us, to reform Wall Street, put dirty cops in jail, end private prisons, clean up the planet, guarantee dignity for all Americans and any other good work we can think of. The polls have failed us. Let’s fight fire with fire. Let’s fight capitalism with capitalism.

We have the numbers. We have the people. We have the moment. The moment is now. #OurRevolution is just beginning, both for the Bernie organization and the greater movement the hashtag was born from. The media cartels and the political parties who serve the bourgeoisie can mock and diminish us, but let’s make them spend their precious money fighting us too. Let’s say it again. If we all throw $5 at any issue, we can change the world.

Until next time, I’m Michael Salamone. You be you. Let’s be good to each other. Cheers. 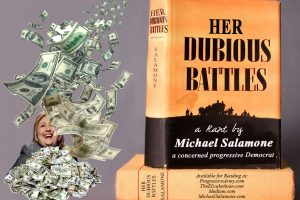 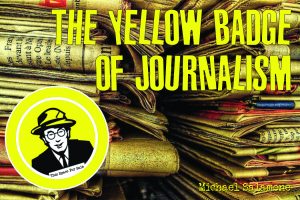 The Yellow Badge of Journalism