Home » Blog » DNC’s Just Not That Into You 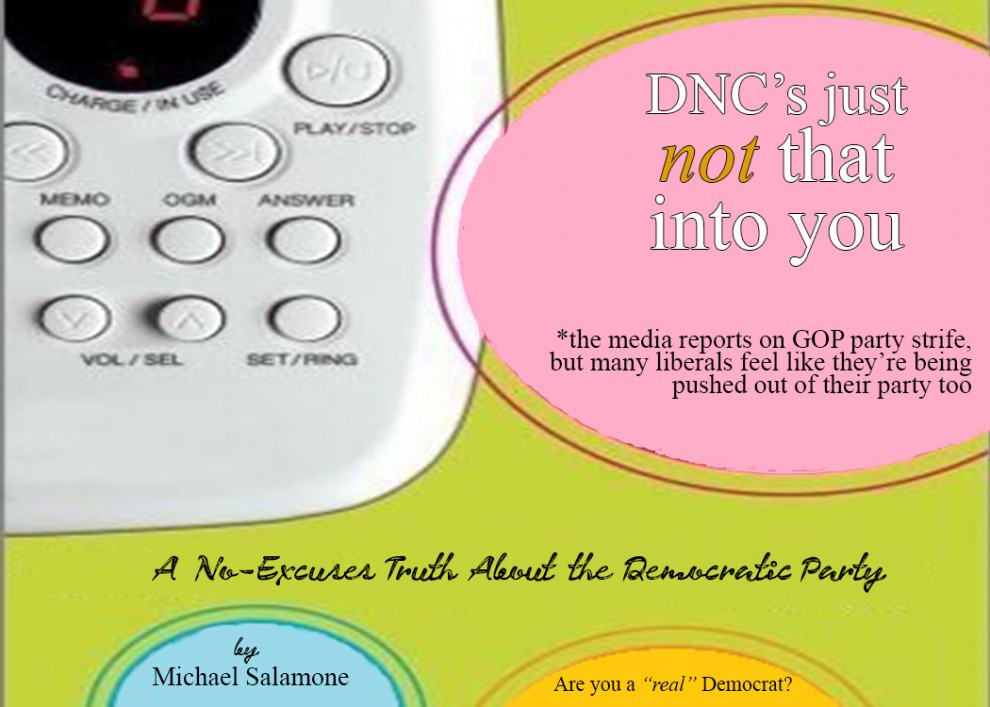 Bernie’s not a “real Democrat,” says Hillary supporting social media users. Many voters who registered as Democrats within the last year in closed primary states have been forced to use often-uncounted provisional ballots. Party representatives encouraged Ohio voters to vote Republican. Party representatives told Colorado caucus goers they had to rally behind Hillary if they care about the party. A Democratic National Committee co-chair has to leave her post because she supported Bernie Sanders and couldn’t co-exist in a party system trying to coronate Clinton. The Democratic challenger for the party chair’s Congressional seat is illegally denied information on voters in their district by the party.
Face it. If you’re a liberal, or a former independent who joined the party this year, the DNC is just not that into you.

As proved in Massachusetts, Illinois and now Arizona, the Democratic Party will even go as far as to disenfranchise voters. They don’t give a fudge about fudging numbers. They’ll have a coronation with or without you.

Are You a “Real” Democrat?

I’ve been told I’m not repeatedly this year, despite two decades of party membership, donations, volunteer work and involvement. Because I support an Independent running on the Democratic party line, all of my years of being a Democrat have been devalued and disrespected. I’m learning to be alright with that, though, because the Democratic Party no longer shares my values. For that reason, I may go a little off the deep end for some of you, this week, but I’m coming from the heart.

What Changed? I Thought Democrats Were Inclusive?

The biggest change has been a slow roll since 1992, but amplified under the leadership of Democratic National Committee chairwoman Debbie Wasserman Schultz. Under President Bill Clinton, Terry Mcauliffe changed DNC fundraising forever. Once off limits Wall Street and big corporate donors were wooed with media consolidation acts and deregulation. That pesky Glass-Steagall legislation that kept Wall Street from gambling with Americans futures since the Great Depression got kicked to the curb. Money flowed in. People like money. “The Republicans do it, so we have to,” became the new party motto for the Democrats, from shady campaign financing to any other immoral activity they got questioned on.

Enter Debbie Wasserman Schultz, a product of the Clinton machine herself as a former co-chair for Hillary for President 2008, who now sits at the head of the DNC. She made lobbyists super-delegates, invited them to the convention (for a fee, of course) and buddied up with pay-day lenders. She changed debate rules to keep Professor Lawrence Lessig from participating to stop his single-issue of campaign finance reform from being put in front of the American people. 85% of Americans polled support campaign finance reform. The political parties do not. Maybe that’s why nearly half of America doesn’t join in on the two-party system “fun” anymore.

The disastrous Supreme Court ruling on Citizens United opened the floodgates to corporate influence. Dirty money was always the problem in American politics, now it became the normal way of doing business. You’d think that the GOP, who totes itself as the party of personal liberty, or the Democrats who advertise themselves as being about fairness would stand up against unlimited corporate contributions. You’d think that if you didn’t know any better. The truth is, it’s all about the money. People of privilege often don’t think about how laws are destroying the American way of life, as long as they’re comfortable.

The media is owned by six corporations, by large. They barely ever report on campaign finance reform. Why? They benefit the most. A majority of that dirty money, be it directly donated to a campaign by corporations or filtered through a Super PAC will end up spent on television advertising. It’s against the interests of news for profit to report on how their profits are destroying democracy.

Political favors don’t hurt either. The Clintons pushed through and delivered the 1996 Telecommunications Act, which stripped away all of the protections guarding against media monopolies. Now only six companies own nearly all of it. What do the Clintons get in return? I would argue they’ve gotten a coronation. Bernie Sanders gets a quarter of the airtime as Hillary Clinton. The media for the first time ever is including superdelegate counts in every tally, as a done deal. Clinton gets softball treatment in town halls and debates and is never challenged on the many unscrupulous and potentially illegal acts that independent journalists and the FBI are investigating. Quid Pro Quo.

So, of course the media isn’t going to report on how many in the Democratic Party feel disenfranchised, want campaign finance reform, or are being disenfranchised at the polls. They’ll scare you with Donald Trump, though, because he’s potentially Hillary’s Ross Perot.

We lawyer up. Seriously. Exit polling for the GOP in all of the States where Democrats reported difficulty voting were spot on. Exit polls for the Democrats averaged to be about 20 percent off, you guessed it, in favor of Bernie Sanders. Lawyer up.

We also should probably start talking, as a movement, about what we do if the Clinton machine succeeds in stealing this from us. They get a couple hundred people to rallies, we get thousands. We have a major force online and new media forming around us. They have dying old media in the bag for them. No part of me believes the Clintons are actually winning with the general populace. I believe they’re winning by DNC corruption on a large scale, from the top down to the bottom.

I’m Bernie or Bust. He’s the only candidate I can support in good conscious. I’m not voting Green. Maybe in another weekly missive I’ll tell you why I think they’re a CIA front to distract the left with, but today I’ll let you search engine it if you’re curious. No part of me can vote for Hillary Clinton, believing she’s the Richard Nixon of our time, but worse. I’ve never voted Republican for President before and am certainly not starting with the orange guy or the religious nut-job.

It’s different state to state, but if we organized, which we’ve proven to be good at, we might be able to get Bernie on the ballot in a lot of States. There are seven States who don’t allow write-in votes. Perhaps we target those and try to lead a write-in revolution. Sure, they’ve already proven to us that they’ll tamper with elections, but if we drown them in paper ballots, we could actually win. Especially when you factor in all of the independents that say they’ll stay home if Hillary’s the nominee. We might have to break Bernie’s heart and form a Super PAC to buy commercial air-time on those evil old media networks though, just to clue the general populace in. I honestly don’t know what we do. Hopefully you look to me not for answers but because we share the same questions.

The only thing that is clear to me is that we’re fighting a corrupt political dynasty, and they’re willing to break any law to win, believing they can’t be stopped and are above the law. Even if you don’t agree with me on that statement, I hope that as an American (or another world citizen interested in American politics enough to be reading this) you want fair and open elections, you know, like we demand from countries we don’t like. We have to lawyer up.

Even with the Voting Rights Act gone, we are mostly protected under the law. There’s just nobody left in the government working to protect us. It’s sort of like food and drug safety. We’re legally protected, but Federal investigators have been gutted so much, we’re really not. So, you can file a class action suit when an Ice Cream maker gives us all Cooties. If your State lets foul play go down in your primary, you have to sue your state Democratic Party and your state’s highest ranking official who oversees elections. That’s where we’re at.

The day Bernie is not running as a Democrat, those of us who are 100 percent behind this political movement have to leave the Democratic Party. Most states you can do this easily by logging into your Department of Motor Vehicles website. I personally plan on going independent for a while as I consider things. I don’t identify as a Democrat anymore. By Democratic leadership trying to demonize Bernie Sanders as a socialist, I’m pretty sure they’ve turned me into a socialist.

I don’t see much legal recourse (and I’m no lawyer) with the media’s breaking of the public trust. They’re private entities who can defend themselves as entertainment at this point. So, in this area, we have to support the great network of independent media so vital to our movement. Join as a member to the Young Turks. Give to the Benjamin Dixon Show through the Patreon link. My little podcast has one too, and though I’ll likely just donate anything I get to Bernie, I do dream of getting better hosting and equipment for all of you kind enough to tune in each week. I need a new tablet for writing too, but I best not start whining about my technology woes. I’m one little guy in a sea of new media people popping up to talk truth to power. Hopefully you’re tuning in. Help independent voices grow. Skip a lunch or a coffee. Pick one you like. Support them.

And if you’ve got it in you at all, join us. Podcasting is pretty easy. Or start a YouTube channel. Write a blog. You don’t have to even talk about news. Talk about your favorite hobby. Write about the books you read. Love knitting? Tell us about it. If we continue to saturate the media landscape, we water down the power the corporate media monopolies have over our society. Also, one thing I’ve learned personally is that there’s an audience for anything. You’ll meet new people, make new friends, and find encouragement more than trolls. But, there will be trolls, I’m sorry to report. That’s just the internet we live in.

I would argue that we’re not the ones who aren’t “real” Democrats. The party of FDR, JFK and RFK has abandoned its ideals. Not progressives. If a political party abandons your values, you’re not beholden to it. Progressives have no obligation to the DNC or Hillary Clinton. We don’t deserve to be told we’re not “real” Democrats. We deserve better.

So, the DNC’s just not that into you. Their loss. Move on. You still look good for your age. Put on that outfit that makes your eyes pop. Swipe left and move on. There are millions of other like-minded Progressives in the sea. We’ll flirt with the Democrats as long as Bernie is running as one, be it through June or until 2024. After that, we’re seeing other people. You do you, and please, if your state hasn’t done so, turn out to vote. Hopefully you won’t have to lawyer up after. 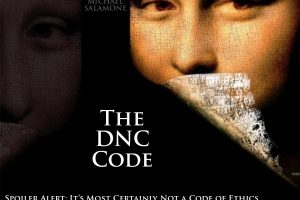 Steal This Vote
50 States of Grey