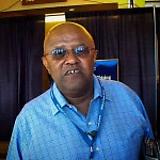 I just met Biff Henderson from The Late Show with David Letterman. He seemed as lost as I was, and actually put me at ease. I told him what a fan I was of Dave’s and of the road pieces he does for the show. He was looking for his crew, and we keep bumping into each other wandering around aimlessly. So far the DNC has been several awkward exchanges and smiles as Biff and I pass each other while circling the arena.

Listing the Year Away: TV is Bad for You