Happy 88th birthday to Stan “the man” Lee, a true icon and hero.

Stan grew up in NYC living in a 1 bedroom apartment with his parents and brother. He took just about every job he could ever find before getting a job at Atlas Comics. (which later became Marvel) At the age of 19, he became the editor of this comic book company.

Besides creating Marvel’s most beloved characters, Stan has done lots of voice acting, television show hosting and movie cameo acting. Since he started professionally on a WPA theater grant, and served in WWII as an Army playwright, he certainly has it in him. Even now at 88 he hosted one of my favorite shows this year for Discovery Channel.

But it’s his comic book work that we love him most for. Stan brought drama to the pages of superhero comics. Heroes were no longer just goody-goodies. They had financial troubles, woman troubles, dealt with issues like prejudice and drug abuse, and family dynamics with real depth.

While his counterparts at DC were running superhero stories like this:

Stan Lee was at Marvel doing stories like this:

So here’s to Stan Lee for an incredible 88 years. Many more to you, good sir.

When a Buffalo Roams Into a Donkey Show 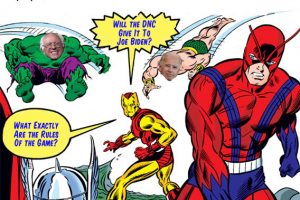 What If Hillary Clinton Gets Indicted?

Listing the Year Away: My 5 Favorite Blogs of 2010
Superhero Obituaries