Some say it’s just a celebration of hyperbole, but I’m always a fan of the State of the Union speech, even if delivered by a president I don’t support. You see, I’m a sucker for idealism, even if off-brand from my own variety, and I enjoy the conversations such events create among the citizenry. I dig it when regular folks start talking about what should and shouldn’t be happening in our country. If Marx was correct that religion is the opiate of the masses, then politics is medical-grade marijuana, and these sort of conversations are the kief, to be scraped up and inhaled by the true junkies.

Sure, less than half of us went to the polls in the midterms, but Wednesday morning, the people of America were discussing politics in a way even a heated primary season hadn’t inspired on its own. Be it lapping up the dissing on Donald Trump, a FOX News bred distrust of the president, or a feel-good moment of disconnect from the realities of the modern age, Americans were concentrated on America, and that is a very good thing.

America is at her best when Americans are tending to her. Give her proper attention and she transforms into something stunning, a real head-turner. I had an email conversation with my mother about income inequality after this year’s State of the Union. That’s never happened before, but America strutted by and we had to acknowledge her, instead of listing family health ailments as per usual.

Did you notice the sparkle in America’s eye on Wednesday morning? I sure did. Friends who normally don’t chime in on politics posted slightly political stuff on Facebook. I took a call from an old college friend who wanted to hear my thoughts on campaign finance reform. Twitter was aflutter with its usual passion for talking points, but at least from my perspective, it seemed a bit more hopeful than usual, both from right and left.

Perhaps this is my own idealism speaking, I mean, we all have our own interpretations of reality. If I’m onto something, however, that means our collective perceptions hit on a great common place: there is work to be done.

“Reality is greater than the sum of its parts, also a damn sight holier.”
― Ken Kesey, Sometimes a Great Notion

No matter what you think of President Obama, the State of the Union is bigger than he is. It’s an annual evaluation of the homeland, our hopes, our fears and our desires for what sort of nation we want to be. Left-leaning folks seemed to be hopeful for the agenda laid out by the president. Right-leaning folks didn’t buy into the speech, of course, but we all agreed that America is ours, special, and needs our attention.

I, for one, was glad to hear campaign finance reform brought up. I think it’s quite telling that 90% of Democrats, 80% of Republicans and 85% of independents agree that campaign finance reform is a top priority, yet no legislation has been passed. Enough red versus blue! Paint the town purple and overturn Citizens United already! If we listened to each other more and bickered less, we might just have publicly financed campaigns by now.

Just before Bernie Sanders yielded the microphone to some Black Lives Matter protesters at the Seattle rally in support of the 80th anniversary of Social Security last summer, I heard Seattle’s Socialist Councilwoman, Kshama Sawant speak for the first time. Though I don’t personally identify as a Socialist, I was immediately enamored by her. I was especially enthralled by the fact that there are idealists outside of the two-party structure still making a difference and using their voice in our country.

As I’ve written previously, I am extremely nostalgic for a time I didn’t live in: when socialism was a big part of the American dialogue, when FDR and Ike led from a place of Democratic Socialism, when Eugene Debs consistently got five percent of the vote for president. You see, I believe America is at her best when the marketplace of ideas is flooded with diversity. I don’t want to take away your right to own a business and prosper. I also don’t want to give up on feeding the poor and housing the homeless. I am an idealist. Ideally, we end poverty and make a pathway for citizens to create their own success stories. Ideally, the people are more powerful than the corporations, but still have the power to build their own corporations.

Kshama Sawant has a different brand of idealism than I do, but I was still eager to listen to her rebuttal after President Obama’s final State of the Union address. I watched a replay on YouTube about 10 minutes after her broadcast ended and was excited to see it had already had over 100,000 views. I would argue that her speech had much more substance than Nikki Haley’s counterpoint from the right, but more than anything, I was just excited that the left had a voice of rebuttal as well. Despite what Bill “Oh Really” might tell you, the President is a centrist. I need to hear from the ideologues.

Wednesday was full of hearing from the ideologues for me, and from regular folks too. As news hit that Al Jazeera America would be closing shop in April, and that our already tiny media landscape was losing a fairly independent voice, I was especially grateful that the nation, at least through my perspective, was talking politics, nearly as much as they were talking about PowerBall.

My own experience is that despite it being perceived as a taboo subject, most people, be they friends or strangers, are quite happy to talk politics. If you treat them with respect and value their opinions, they are most likely going to reciprocate. I often find inroads to reeducate FOX viewers who have been misinformed this way. People are open to facts when you treat them with respect. When we do disagree to the point that it gets heated, I just crack a joke about how we should serve in Congress together and get paid to fight about the issues without doing anything about them. You see, most people are much more reasonable than members of Congress, let alone any of the talking heads on the television.

Sometimes we ARE as great a nation as whomever is president tells us at the annual State of the Union address, because the American people are great. We are a diverse, interesting people with different backgrounds, beliefs, perspectives and opinions. The melting pot is what makes us great, and just like any good stew, it’s best if you stir it up a bit. Mix it up! Keep talking about America, Americans. We don’t have to always be divided by red or blue. There’s plenty of purple we can do. 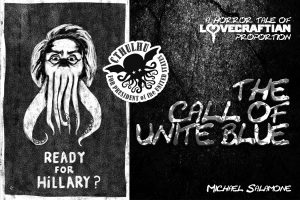 The Call of Unite Blue