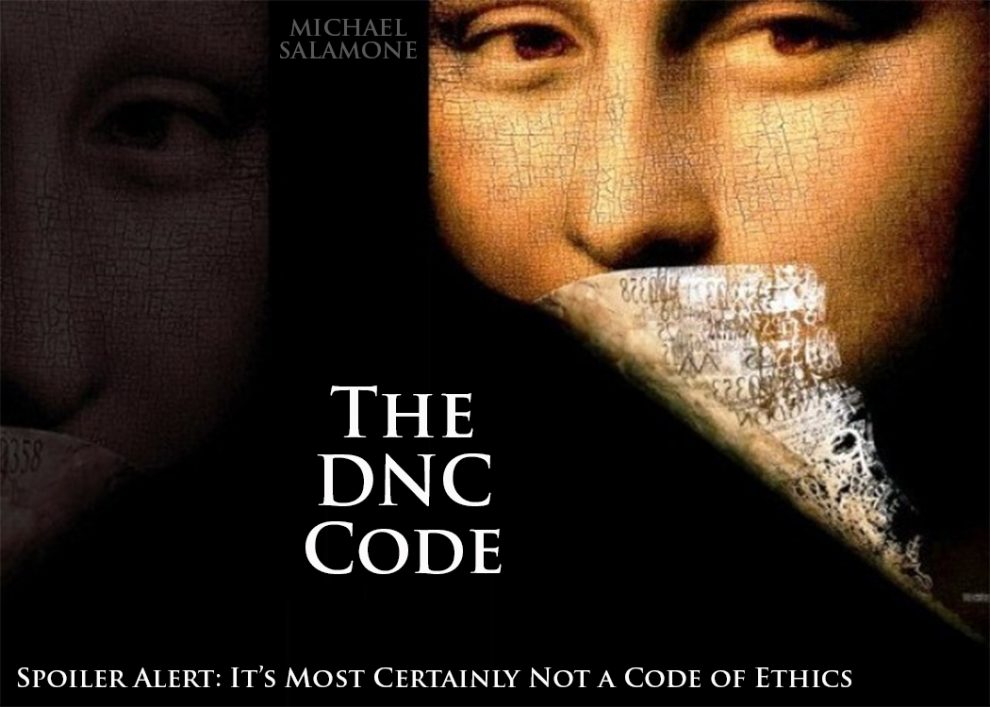 It almost feels sarcastic to say “Democratic Party” aloud these days, or even typing it out as I did just now. The Democratic National Committee in current incarnation is hardly democratic at all. From super-delegates to allegations of voter fraud to a pyramid scheme fundraising that ultimately only funnels local money to Hillary Clinton, the DNC currently looks more like the Democratic Party of Boss Tweed in the late 1800s than it does the party of FDR or JFK.

“Men go to far greater lengths to avoid what they fear than to obtain what they desire.”
― Dan Brown, The Da Vinci Code

The Democratic Party establishment fears its own Progressive wing. In a dangerous gambit to polarize what’s considered just over half of their party base, the party has put the desires of its leadership to line their pockets with lobbyist money above unification. Gone are the days of activists debating and hashing out a party platform of ideas on how to serve the average American. Now it’s tactical politics to serve the corporate and industrial overlords who cut the checks.

There are many factors to blame for the corruption of the Democratic Party. Like most things in modern politics, a big chunk of the blame belongs squarely on the Clinton family.

It’s widely known that party chair Debbie Wasserman Schultz was a former campaign head for Hillary Clinton in her 2008 bid for the Presidency against Barack Obama. Since the 2012 midterm elections, I’ve personally believed that Wasserman Schultz has been more concerned with further aligning the party with lobbyists, Super PACs and filling the coffers with industrial donations than actually doing the job of the party, which is winning elections. She rolled over and pretty much gave away the midterms, and now under her leadership, would rather rig the Democratic nomination for her mentor than give Progressives a seat at the table. Money is her motivation. The only loyalty she knows is to the Clinton cash machine.

I’ve been a member of the Democratic Party since the age of 18, for two decades. I’ve previously written about how I’ve struggled with that affiliation pretty much the entire time, because of what the Clintons did to us while in the White House. This all stems from when close Clinton ally Terry Mcauliffe was head of the DNC. He pivoted the party’s fundraising away from traditional Democratic strongholds like unions and began courting Wall Street. He turned the Clintons into what became over 40 years, a $3 billion enterprise. In tandem, the party’s priorities changed alongside the influx of funding from the Goldman Sachs type donors. When you follow the money, it all leads to how the Democratic Party began to abandon its values for dollars. The party that broke up monopolies, under Bill Clinton, started making it possible for monopolies to form again. It’s no coincidence those monopolies are funding Hillary Clinton today. The chips have been called in. Democracy was lost in the gamble.

The biggest trick the devil ever played was branding the Republican Party as the home of the economic elite, old-money, corporate greed and military industrial complex. It’s time for us to stop living in denial. Both parties are corrupted in servitude to these demons.

Debbie Wasserman Schultz is a student of Clintonomics. No, not the continuation of Reagonomics that establishment Democrats rebrand in hopes of tricking us into thinking trickle-down works. The true economy of the Clintons is trading political favor for financial gain. Wasserman Schultz has doubled-down on the Mcauliffe gambit, this time putting protecting and growing the very industries her constituents and party members want reigned in above all else. I have come to believe that the much talked about “coronation” of Hillary Clinton was not just the goal of establishment Democrats, the corporate elite and the media/military complex, but has been long-planned.

When Barack Obama rode a populist swarm to defeat the Clinton bid to return to the White House, rather than carry their bags as Bill Clinton would have preferred, I propose that the Clinton machine started hatching a conspiracy to make sure that a simple thing like the will of the people never got in her way again.

You don’t have to be Noam Chomsky to understand that politics is a corrupt and dirty game, that dates back to the founding of our Republic. Perhaps because I’m an idealist, I’ve always preferred to imagine that the Democratic Party at least occasionally bucks back against that establishment. Sure, JFK was likely involved in some shady tactics to get elected, but he also vowed to break up the CIA over their shadowy machinations on behalf of the industries who profit from war. He could kill a hobo on camera tomorrow, and I’ll still somehow find it possible to think of Jimmy Carter as being a good man who cared about humanity. I’ve been critical of President Obama, but I’ll always think he was our coolest President. I fear another Clinton presidency more than cancer or heart failure.

Some of this we’ve covered before in past columns or podcasts. Please forgive repetition in the name of presenting my case. Also please forgive me if I get a bit droll in my narrative here. If we had a functioning fourth estate of a free and independent media in this country, we patriots trying to save the nation from forever being an oligarchy, or becoming worse, wouldn’t have to keep repeating ourselves.

The Clinton Telecommunications Act made the media mergers possible which created our current landscape of six corporations. Today, those corporations all tilt coverage of the Democratic primary in Clinton’s favor and in some fashion or another donate to her campaign.

While calls to “release the transcripts” still go unanswered, more and more details come out about the millions of dollars the Clintons have made from that industry since removing the Glass-Steagall act when in the White House. Yet another industry that has consolidated power into the hands of the few, now beholden to giving power to the family who made it all possible.

The NGP/VAN data breech that the DNC and corporate media tried to blame Bernie for is much more interesting than those media folks want you to know. They left out key details such as the relationship between that vendor and the Clintons and Wasserman Schultz. Corporate media also left out how many Bernie supporters reported being contacted by the Hillary campaign right after the first data breech. When I talked with people for Steal This Vote who had been dropped from voter registration as Democrats in closed primary States, a large number reported being emailed by the Clinton campaign suspectly. As early Bernie supporters, they believe they would have been part of the data breech.

There are also suspicious dealings between the Clintons and the Diebold voting machine people. Clinton has won above the exit polls by about 19% in districts using those machines. This was true in her 2008 bid for the Presidency as well. Conspiracy theory? That’s what any of the Correct the Record paid “million dollar trolls” will come at you with if you try to have a discussion in a public forum online, but at this point I feel it’s on the Clinton campaign and the Democratic Party to prove they’re not conspiring against us. My own mother lost a battle against a Democratic Party appointed election commissioner in New York hell bent on denying her access to the primary. She is a life-long Democrat. Likely not much longer.

Let’s not forget the Clinton Foundation: a foundation where only 5-10% of money raised goes towards the charitable work they tote, a foundation where foreign governments were rewarded for their donations with arms deals. Each time you read about the bombings in Yemen, blame a donation to the Clinton Foundation, a foundation that also took all sorts of donations from the other shady industries I’m discussing here. While Secretary of State Hillary Clinton pushed things like fracking around the world, the Clinton Foundation raked in dough from fossil fuel. In my opinion, Hillary Clinton sold government access in exchange for donations to a non-profit organization from which she, her husband and daughter, as well as many of their allies, draw lofty salaries from.

All of this without mentioning how Wall Street and banking industries are tied in with those who profit from war and exploitation of natural resources . Guess what? Hillary Clinton receives the most in donations from arms manufacturers. Every sector that makes money from warfare is somehow connected to the Clinton camp. But how does this corrupt the Democratic Party?

I believe, we have clearly identified financial motive for those who suckle from the Clinton machine bosom to want to rig primaries for Hillary Clinton. The dots aren’t difficult to connect on how it could be done. As per usual, we’re short the whistleblower needed to prove such allegations, so I present all of the previous as my humble opinion. I am, after-all, just a citizen pundit. As a citizen and amateur pundit (I don’t get paid by anybody. No David Brock sugar daddy for me. If anything I lose jobs for my efforts via this column and podcast) I can offer you my bias openly. I support Bernie Sanders. I believe despite all that we’ve discussed so far, Bernie will be our next President. He’s faced all of the conspiracies above and is still in the fight. Tens of thousands of us turn out to Bernie rallies. A few hundred turn out for Hillary. I do not believe if it were a fair and level playing field that Hillary Clinton would be winning the 2016 Democratic primaries. The people and the passion are on our side. This citizen pundit believes there are enough of us to overcome corruption.

However, two of the greatest actual journalists doing real journalism working today, Lee Fang and Zaid Jilani broke a story at The Intercept yesterday outlining how the party is amping up a new conspiracy to rig the Democratic National Convention itself. Not content with just rigging the game, they want to box Progressives out completely in the final match up.

They’ve sold the entire process to the very lobbyists and industries that have fueled the Clinton political dynasty. The Democratic National Committee is now a wholly owned subsidiary of the Clinton slush fund machine, in my humble opinion. There is no code of ethics. There is no party platform. There’s just Ed Rendell and Debbie Wasserman Schultz passing around collections plates touting a false religion to the parishioners while grifting the system.

Once again, dear reader, I implore you to make arrangements to be at the Democratic National Convention in Philadelphia, Pennsylvania this summer. We, the people, in order to overthrow oligarchy must make a stand. We will have time to take down the big orange fascist afterwards. Let’s take back Democracy first.