Home » Blog » We Are the Wild Things 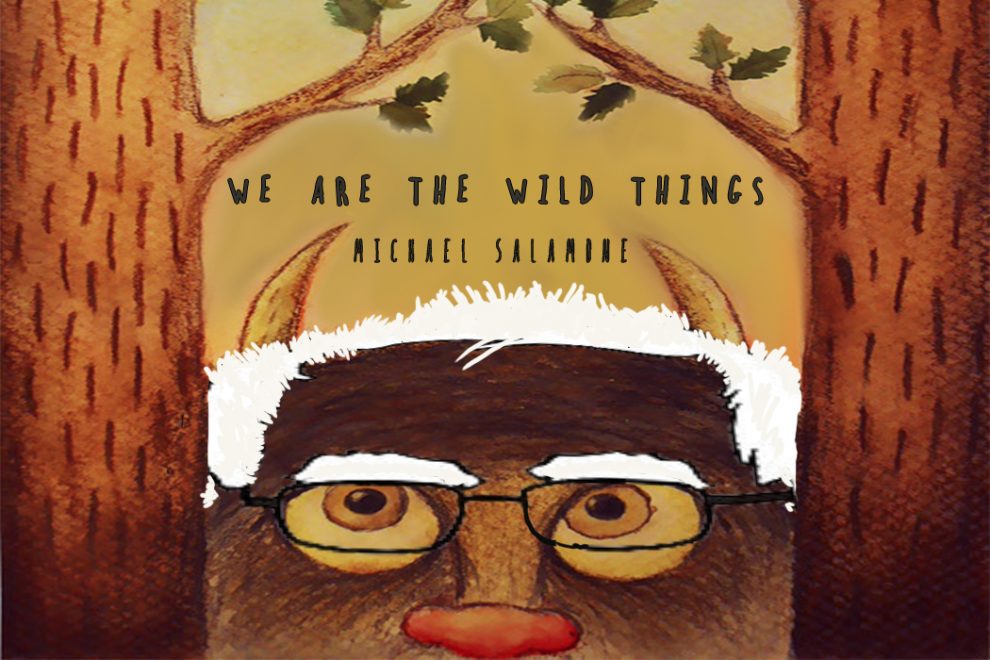 I am a grown man who still wonders what adventures the wild things in Where The Wild Things Are had after their leader sailed home to his supper. Characters don’t cease to exist once the protagonist moves on. Their stories just aren’t told any more. We can’t fall into that rut. We have to demand our stories be serialized and known far and wide.

In a few months,

After more than a year,

In one boat or another,

Bernie will sail on

Be it President or Senator,

Or something in between,

He will find his supper waiting for him.

Everyone will know that story.

We wild things, who made him our leader

We are our own community.

Our stories will be told soon enough.

I used to be a Run Warren Run guy. I wrote that Senator daily and tried to get others to too. Then a guy I know got a hold of me hopeful I could make some art for him, for Bernie Sanders.

“Bernie’s going to run? I like that Bernie,” I said.

“We think he will, and we’re getting ready to help,” said my friend.

My friend, Jay, is an Iraq veteran who now uses his call to service and patriotism as a community organizer. The art he wanted was for a group of his fellow vets that were getting ready to provide grass roots support if Bernie ran. By the time Bernie announced he would run, I had abandoned my efforts for Liz Warren, and was already all in for Bernie. I’ve been making Bernie art ever since.

I remember thinking how fortunate we were that this man, with this record, with this moral fortitude, was willing to step up and be the progressive voice we would so very much need in the 2016 Presidential contest. I still feel that way.

You see, I was never going to support Hillary Clinton. I fell out of love with that family when they were in the White House. I was hugely disappointed with Hillary as my Senator. I’ve been alarmed that the Clintons have sold government access to accumulate personal wealth for a quarter century. I knew media consolidation, welfare reform, private prisons and the crime bill were bad news from the beginning. I was a young man back then, full of idealism. I’m an aging man now, full of idealism. Standing against the Clintons, and their second family, the Bushes, has been my compass.

I am against Hillary Clinton becoming President or holding public office of any sort ever again. I am for Bernie Sanders becoming President and feel the world is a better place with him in public office. These are two separate ideals that just happen to be in concert together at this point in history. However, that’s not really the story I want to tell today.

I am artist. By nature I spend far too much time reflecting on the past and dreaming of the future. I can’t help but look back on the last year and let my face erupt in grin over all that we’ve build as a movement this last year.

Just over a year ago we started meeting in each other’s homes because we had a progressive candidate. Not a milquetoast progressive like Martin O’Malley or Lincoln Chaffey. We had a vetted and consistent, honest to God liberal willing to run. I for one didn’t think he’d have a shot, but I was willing to go all in for him, because frankly, I didn’t think we’d ever get another chance to save the Republic. After just four years of a Hillary Clinton presidency or whatever monster the GOP would run, it’s going to be totalitarianism no matter what. Then there was Bernie. Democracy had a life support system.

We are the wild things. We are the disenfranchised who had all but lost hope in the American promise, hijacked by special interest corporate lobbyists. We gathered and banded together when a good man washed up on our shores, looked us in the eyes and growled. We growled back. It was time for a romp.

A movement unlike any other in modern history came together. All in just one year, wild things banded together with other progressives to stand up and fight for the agenda Democrats like FDR, Truman and the Kennedy brothers used to promise us, the Democratic platform, before it was corrupted by the Clintons. The fight against oligarchy had one last major standoff, and patriots all over this great land of ours stood to arms.

We continued meeting in homes. We took to social media and internet broadcasting or publishing. We gathered at rallies by the tens of thousands. We phone banked. We invented “facebanking.” We knocked on doors seeking solidarity with even more strangers. We’re still doing all of that, and anything else we can think of.

Bernie will need his wild things to keep his feet to the fire on our issues and platform if he is President. We will have to reform Congress no matter what. If Clinton or Trump take office, we will have to fight them and the corporate media structure that props them up every day for the next four years.

Organizations like BrandNewCongress.com and ReformTheDNC.com have formed. Good, honest people who hate the idea of getting involved with something as dirty as politics are considering running for office. Every day someone new joins the growing independent media movement. Good things are happening. The movement isn’t going anywhere. It’s growing. The wild things have many more adventures ahead of them after their leader sails on.

I know the Clinton camp is going to try and steal California as they’ve stolen so many other States by removing Bernie supporters from the voter registration, dirty voting machines and any other dirty trick they can think of. We know the media will call her the nominee despite the fact that no candidate has 2,383 delegates without Superdelegates, who don’t vote until the convention. However, I still think Bernie Sanders will be our next President. I feel it in my gut. I see it in the streets. This is our time. This is our moment.

No matter what happens, we can never stop talking about the election fraud we saw in the 2016 primaries, because we can never let it happen again. Take Kentucky, for instance. Bernie won counties that didn’t use Hart Intercivic voting machines, Hillary won the broad majority of those. Hart Intercivic is owned by HIG Capital, a major investor in privatized prison vending, security and health care services. Isn’t that Hillary’s wheelhouse of donors? Sure is. With all of the other reports on election fraud, this cake icing merely spotlights the old adage: the simplest answer is most likely true. The simplest answer is that the Clinton machine stole the primaries by hook and by crook.

It would all be for nothing if we elected Bernie and then went back to our lives the way that they were before we banded together. No matter if Bernie is the be President, some cabinet position official, or continue to be the esteemed Senator for the great state of Vermont, the wild things still have adventures to come. Bernie’s journey will separate from the movement. Ours will take new form. No matter what happens to our lead singer, we need to keep touring and playing the hits until they are America’s songs. None of us are equal until we are all equal. If even one child is hungry, we must all be thirsty for change. I could list slogans all day, but you know the drill. Solidarity. We’re all in this together.

I’ve written an awfully lot without out saying much of anything you probably didn’t know, but just in case an undecided voter in one of the last remaining primaries happens upon this weekly missive of mine: come join the wild things for a romp. You have unique power. You can send a message to the banksters who have been ripping us off since the 90s. You can stand against the oligarchy which has overtaken Democracy. You can vote for Bernie.

Yes, the Democratic Party is corrupt and has rigged the game even to the point of making lobbyists Superdelegates. However, a vast majority are still elected officials who have to answer to the people. If we can send Bernie into the Democratic National Convention with the lead in pledged delegates, Bernie Sanders will defeat the Clinton machine. To do that, we will need voter turnout unlike anything we’ve ever seen before, in California especially, to counter any election fraud or dirty tricks they attempt or succeed with. If you’re undecided, I beg of you to take this one stand with the resistance. Band together with we wild things for at least that much. Do it for your country.

To my fellow wild things: I love you. Your fight is my fight and your kindness and passion empowers me more than I will ever be able to express gratitude for. Keep growling. Soon they will hear us roar.

Game of Cojones
Her Dubious Battles