Home » Blog » What If Hillary Clinton Gets Indicted? 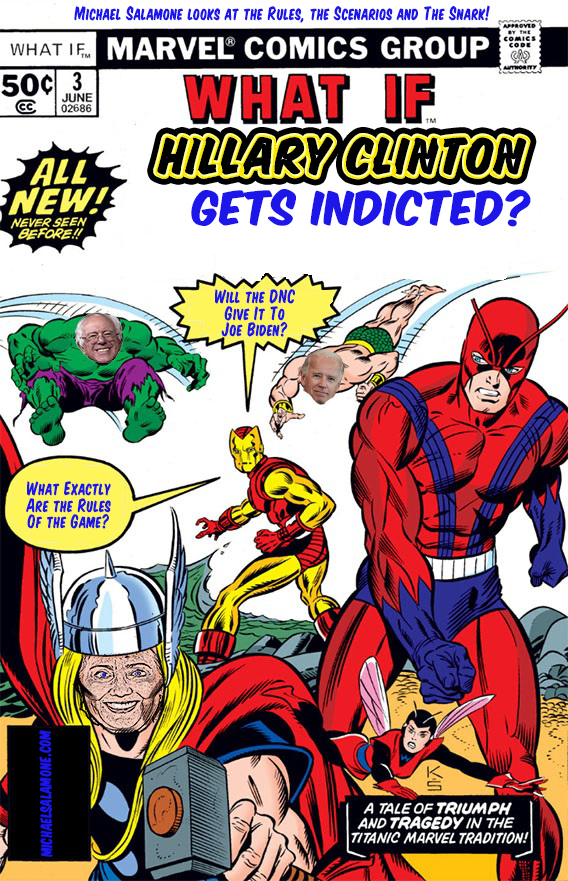 Cenk Uygur floated an interesting proposal on The Young Turks tonight: what if the reason we’re seeing Joe Biden on so many morning shows is because the FBI are close to their investigation leading to an indictment against Hillary Clinton? Check out the segment. It’s thought provoking to say the least.

FBI Director James Comey made it clear this week that the FBI is Investigating Hillary Clinton. It’s not an inquiry or whatever her campaign is trying to spin it as. When the FBI Investigates, they seek to have a grand jury indict, then they seek to prosecute. That doesn’t mean Hillary’s going to jail. It does mean there’s the possibility for a shit ton of drama to come, as we’ve come to expect from all things Clinton. So… How does that affect her bid for the Presidency and to be the Democratic nominee?

It’s been a while since I’ve studied this stuff, so I made the mistake of querying Twitter. After getting ALL CAPS SHOUTED AT by fellow Bernie supporters who were angry that the rules don’t just open up for a coronation of our candidate, I decided I better study up. We will look at each of the possible scenarios.

What If Hillary Is Indicted BEFORE The Democratic Convention?

If Hillary is indicted before the convention, conventional wisdom says she will have to step down as the nominee. However, this is Hillary Clinton. She really wants the power of the Presidency. Possibly more than any human being has wanted it before. It’s not illegal for her to keep running. It’s stupid, because she’ll never win a general election with a criminal case looming, but it’s allowed.

If she DID step down, that’s where things get wild. Her pledged delegates get released. They can nominate Joe Biden, they can switch to Bernie, they can sit on the floor and cry for days on end… You see, no matter who it is, any nominee needs 2,383 votes to become that nominee. Nobody, Not Hillary Clinton, not Bernie Sanders, not Joe Biden, not Jesus Christ Superstar is coming into the convention with enough delegates to be the nominee. You see, super delegates don’t vote until the convention, as they’re unpledged. Anybody on Team Hillary or Team Bernie who tells you different is either wrong or lying.

Bernie’s plan has been that he will win over super delegates as he’s more electable against Trump. Hillary’s plan is that she will win over Bernie’s delegates because she’s in denial of the political revolution. Joe Biden just wants to get called back up to majors to play again next season. But nobody, not Bernie vs. Hillary, not Bernie vs. Biden, not Godzilla vs. Mothra is becoming the Democratic nominee without 2,383 votes.

If Hillary is forced to step down, and Joe Biden is nominated at the convention, it will just be him, instead of Hillary, fighting Bernie for super-delegates. However, in my humble opinion, this is an even harder fight for Bernie because unlike Hillary, Joe Biden is electable against Trump. She can’t win the swing states. Joe can.

I still don’t see Bernie delegates switching. Nope. Not gonna happen. So, it’s going to be messy no matter what. Still, let’s look at other possibilities.

What If Hillary Gets Indicted AFTER Becoming the Democratic Nominee?

If Hillary Clinton wins the nomination and then gets indicted, she can still run for President. Again, it’s stupid of her, and dooms us all to a Trump Presidency, but she could still run. Something tells me Trump is already picking out gold-plated drapes and which leopard skin rug that his sons killed for the Oval Office based on this scenario.

If the party demands her to step down, after she’s won the convention and become the nominee, or if she broke from Clinton tradition and did the right thing herself, it’s the Democratic Party who picks the nominee. That’s right, Debbie Wasserman Schultz and her team of former politicians turned lobbyists pick. No voters. No Democracy. Thems the rules, folks.

A Joe Biden with Elizabeth Warren as Veep ticket is probably the most palatable thing they could do without giving the nomination to Bernie, but it’s still going to be chaos. First off, Liz Warren is not the Progressive darling she was just a year ago. Bernie supporters are pissed at her for not endorsing Bernie. And though a lot of us kind of like Joe, he’s not Bernie either. We’re going to want the runner up to be given the title, like any good beauty contest. Anything else will seem un-American. But, that’s sort of how the Democratic party operates these days, anti-democratically.

What If Hillary Gets Indicted After Winning the Presidency?

This is actually the most likely scenario in the bunch. Our criminal justice system moves slow. Even if she’s indicted beforehand but not prosecuted until after she won the Presidency, this is the same timeline and outcome: eventually her Vice President becomes President. That’s right, if somehow she gets past Trump, who is killing her in swing states, she’s going to at least be impeached from all of this. I really don’t see her beating Trump while under investigation or after an indictment. Let’s give her magic points in this game and go there though.

Once she’s prosecuted, and it’s becoming clearer that this is the intention of the FBI, Congress will impeach her. Awww… She and Bill will have that in common! How romantic! However, I think hers would be more like Nixon’s and she’d leave office in disgrace. Meaning Team Clinton better be awfully smart about who they pick for Veep. That’s ultimately who we’re voting for in any Hillary Clinton White House bid.  Which is why we better also ask…

What If Super Delegates Just Did the Right Thing?

This is our best case scenario folks. If super delegates rally behind Bernie and make him the nominee, we avoid all of this soap opera. I think a lot of Clinton voters vote Clinton because they want this soap opera, because that’s what you get with Clintons. However, it’s not good for America. And President Trump is certainly bad for America, which is the most likely outcome of any of this if Hillary Clinton is the nominee.

Which brings us back to Bernie’s plan… He thinks he can win over the super delegates because he’s the most electable against Trump. And as we all know, Bernie’s got pretty powerful wisdom. As my friend Michael Graham (BLUpfront) said on Twitter: for every bad decision America’s made in the last 40 years, there’s a video of Bernie Sanders trying to stop it. Maybe Bernie’s been right all along. That’s pretty much his style.

Uh oh. I have a new album in the works.

Respecting That I Was Right in Retrospect

Memorial Day 2016
All of Us Together